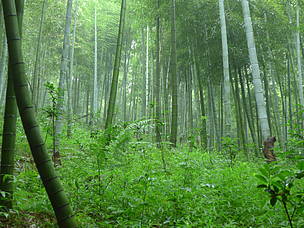 According to Guinness World Records, some species of bamboo can grow up to 2.91 ft/day — or, 1.5 inches/hr! So if you sit long enough with a bamboo culm, it might just grow before your eyes!

So how does it grow? As a colony plant, it uses its energy to expand its roots and grow more shoots in the spring. These shoots emerge out of the ground to grow taller and wider for around 60 days. After 60 days, the canes stop growing altogether, and energy is directed back to the roots for the development of further canes. This is where it diverges from most other flora, which put their energy into continued growth of the original stem. Once bamboo is established (usually after 3 years), the new shoots that emerge each spring will continue to get bigger and bigger. Pretty cool, right? 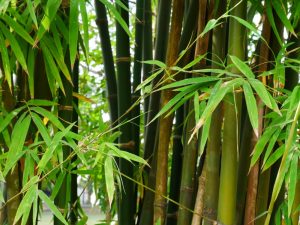 2. IT HAS REGENERATION SUPERPOWERS

No, really! Cutting bamboo actually stimulates growth. How does this work? Well, rather than directing energy towards regaining its lost height, a cut bamboo stalk will simply unfurl new leaves. These leaves, in turn, create and send energy down to the root system to encourage the growth of new shoots. The more that gets harvested, the faster it grows. That makes bamboo an incredible renewable resource that can be harvested and will regrow naturally without the need for manual reforestation.

3. IT CAN SEQUESTER A LOT OF CARBON

Bamboo’s incredible growth rate is more than show stopping — it also translates to some serious carbon sequestration benefits. When properly managed and intensively harvested, bamboo can sequester up to 1.78 tones of CO2 per clump per year. This translates into a CO2 drawdown curve that’s 10X faster than that of woody trees. That’s HUGE! 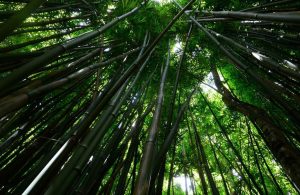 4. BAMBOO FILTERS AND SLOWS THE FLOW OF WATER

Dense bamboo roots form a water barrier, and are used by coastal villages to protect their crops from getting washed out by rising water tables. And thanks to this barrier, bamboo can effectively filter organic matter (including soil nitrogen), leading some scientists to explore it as a sustainable wastewater treatment option. 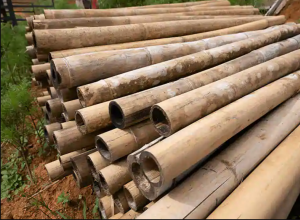 Because it contains large amounts of silicate acid, bamboo is abnormally flame resistant. This is good news in fire-prone regions of the world, where other tree and grass species are regularly devastated by wildfires. Incorporating clumping bamboo into tropical reforestation efforts, then, can protect the long-term viability of projects.

Which makes it an incredible, environmentally friendly building material — especially in earthquake-prone regions. In this regard, bamboo has been prevalent since the beginning of humanity, and has been used in place of wood, bricks, steel, and more. In fact, in some countries, bamboo stalks are used to build scaffolding. If we used bamboo for more construction purposes, we would save many trees and primary forests from deforestation.

7. IT HELPS TO HOLD THE SOIL TOGETHER

Because bamboo is a grass, it has a very shallow root system — with rhizomes only populating the top 6 inches of the soil. The rest of the roots only spread around 14 inches deeper. But because the roots are so densely clumped, they do a great job at holding the top layer of the soil together, thus preventing soil erosion.

8. IT LIFTS WOMEN UP

Seriously! The light weight of bamboo allows women to participate in the bamboo economy, giving them access to a potentially lucrative source of income, and can help secure them a place in decision-making in political, economic and public life. Some examples of products they can make with this self-sustaining resource are: bamboo briquettes, charcoal, incense sticks, and furniture. Pretty amazing, right?

Well, it depends on which type we’re talking about — running or clumping? In running bamboo, the rhizome grows horizontally away from the culm, and can indeed spread rapidly over large areas of land. Conversely, the rhizomes of clumping bamboo grow vertically, spreading upward and growing directly off of each other. Above-ground, this causes the new shoots to “clump” together — and thankfully, that means it isn’t invasive. It also depends on where you are and whether bamboo grows naturally in the region. It is native to tropical, sub-tropical, and temperate climates and is most common in Asia and South America – though it also grows in parts of Australia, Africa, and in the southern United States.