A day at the Green School in Bali 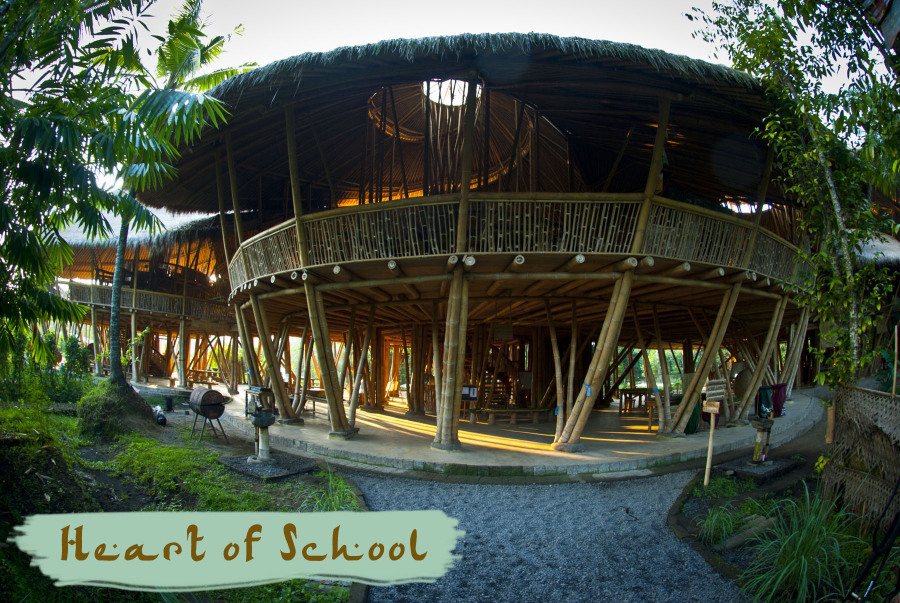 In the shade of the open-air bamboo warung (the Balinese equivalent of a small cafe), I listened to the buzz of the cicadas rather than the buzz of fluorescent bulbs, and sipped on a frozen strawberry lemonade drink made with fresh fruit and raw cane sugar grown just across the path. I watched as children rushed in to order a morning treat, which came atop a small basket of banana leaves (instead of paper napkins), swallowing down fresh fruit juice out of glass cups (instead of plastic). The morning went by slowly and gracefully; parents sat in the warung for hours, talking with each other and with me, eager and anxious to find human connections anywhere and everywhere.

The Green School, the soul-child of John and Cynthia Hardy, sits on 23 acres of lush, tropical landscape. The bamboo classrooms (which house pre-K through 11th grade) seem to nearly sprout right out of the ground. The Heart of School is the most stunning; currently the largest bamboo structure in the world, it comprises two swirling vortexes that collide to create a third, double vortex in the middle. The Heart of School houses the library, the administrative offices, and a few classrooms. As we take our tour, we walk by skilled Balinese men sitting cross-legged on the floor building lockers out of, you guessed it: bamboo. In fact everything is made of bamboo, from the shoe cubbies to the dry-erase boards to the beautiful beams engraved with names of the school’s supporters.

Delicious smells waft throughout the open-air building as the cooks throw delectable pieces of local meat onto the BBQ and prepare salads and potatoes from produce grown right there on the school’s land. Surrounding the Heart of School are gardens bursting with ripe, red tomatoes, shaggy heads of lettuce, fruits of all shapes and colors. In fact, every classroom is responsible for its own garden.

“The idea is that the gardens roll right up to the edge of everything,” explains John. “The Earth is here for one reason: that’s to produce food for people and for animals. If kids figure out that the Earth is for food, maybe then they’ll think twice about bulldozing it.” As we walk, John points out each tree as we walk by: banana, jackfruit, cacao, clove, tapioca, papaya. Suddenly we are surrounded by a soft cloud of dragonflies. “Proof that there aren’t any pesticides,” remarks Cynthia with a smile, for they’re eating the bugs that would otherwise be wiped out by farming chemicals.

But it’s not just food that excites John and Cynthia about this place. It’s the bamboo. “Bamboo is really magical,” John says lovingly. He references a Vietnamese proverb: When the bamboo is old, bamboo sprouts appear. And indeed, bamboo can grow forever.

We stop and speak to a woman who is splitting bamboo seedlings, and John and Cynthia explain their program to spread the growth of bamboo. This woman processes more than 400 seedlings a day, which can then be split again in a few months, reaping hundreds and thousands of tiny future shoots of bamboo. They take these seedlings to surrounding villages and give them to the farmers to plant, which allows the plant to suck up more CO2 and deliver more oxygen. “After 5 years when the bamboo is fully grown,” Cynthia points to a piece of bamboo wider than my thigh, “we’ll go back and buy the bamboo from them.”

Bamboo is also being used to help teach the students about their own effect on the environment. John and Cynthia seek to create a carbon-positive community. The students will look at their travel, the amount of gas they burn, and the amount of electricity they use to calculate their own carbon footprint. They can then understand how much bamboo they will need to plant to not just offset their carbon footprint, but to send their effect into the positive.

The real magic of the Green School, though, happens inside (and outside of) the classrooms. It is obvious to me, as Carina Hardy, their middle daughter, trots past us donning an enormous Monty Python costume, chanting silly words which explode into giggles, that these children are excited to be at school: they are alive, empowered and challenged by the idea that they can influence the world around them in a very profound way.

The school’s mission statement reads “Empowering global citizens and green innovators who are inspired to take responsibility for the sustainability of the world.” The administration is constantly finding new ways to incorporate new ways of thinking and seeing into the students’ curriculum. Not far on the horizon, Cynthia hopes to be able to incorporate more physical interaction with the land: “Kids will take responsibility over pieces of land,” Cynthia says. “They will work the land, cultivate seedlings, plant the seedlings, weed the rice fields. When the rice is fully grown, they will cut it, thresh it, take it to the mill. They will see brown rice and compare it to white rice. They will look at the weight, the cost, the world price versus the subsidized price, how many hours it took to make, how nutritious it is.” Students also learn how to make soap from coconuts, chairs and charcoal from other natural resources. This is the vision: a complete, sustainable and experiential learning experience that takes advantage of what’s been provided here on Earth, and using that to both create and conserve.

John and Cynthia’s daughters have embraced the greater responsibility and entrepreneurial spirit that comes with being a student at The Green School. Their youngest daughter, Chiara, recognized a need for new computers at the school and kickstarted an “Ice Cream for iPads” program in which she sells cups of gelato during breaks and lunchtime for 20,000 rupiah (a little less than $2.50). So far, Chiara’s initiative has put 4 iPads in the library! 15-year-old Carina Hardy takes on leadership positions of all kinds as well; as a sophomore she is now co-directing the school’s spring play, The Wizard of Oz. John’s eldest daughter, Elora, was never a student at the Green School, but she shares her father’s passion for change and runs Ibuku, a design firm responsible for the sustainable design and construction of both the Green School and their newest pursuit, Green Village, a community of staggering open-air homes made entirely from bamboo.

As we finish our tour, we walk by the initial model for the Heart of School. “This is how it started,” says Cynthia. “It started as a sketch, and then it became little sticks glued together, and then it became this.” She gestures around her. “It is the product of our collective imagination.” Indeed, as my eyes wandered from the tiny model building to the giant swirling weave of bamboo above my head, I could feel the reality of the place. There’s no theory or proposal here: this is the real deal. Things are happening quickly, thoughtfully and profoundly.

John expresses his gratitude for TED as we leave. “When they published my talk, everything at this school took off like a rocket ship.” John referenced a student body of 120 in his TEDTalk last summer; since then that number has doubled, as has the number of countries represented by the students. Their new challenge: finding teachers who are committed to teaching the most basic of concepts in the most exciting of ways.