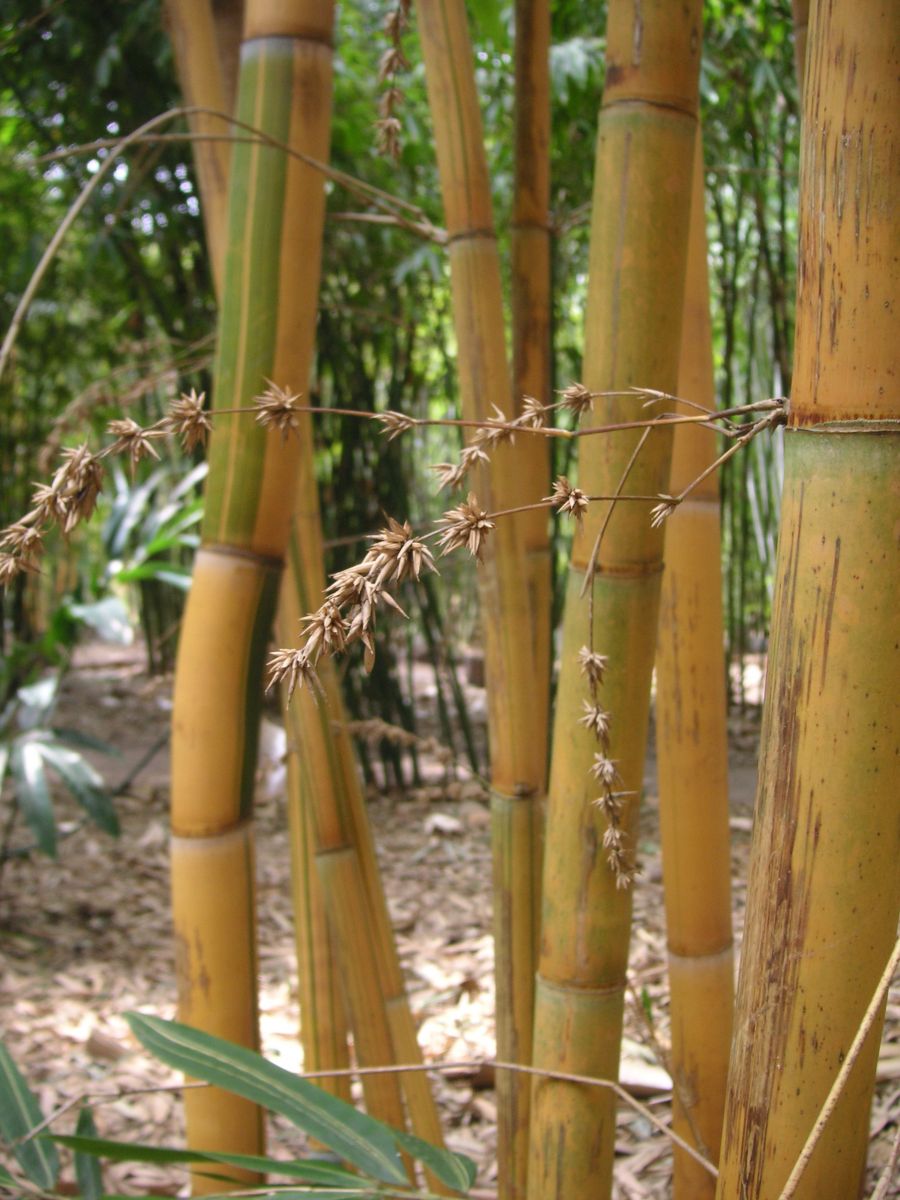 Bamboos popularity has risen in recent years fueled by its myriad of practical uses and aesthetic features. Bamboo is the fastest growing and most versatile plant in the world with many nations depending on it for their livelihood. However, in western countries (particularly Australia), bamboo has been somewhat misunderstood and even seen as a pest due to the early introduction of so many running species.

There are about 1500 bamboo species in the world, however approximately half of these are monopodial (running or invasive) species. It is unfortunate that in the past, so many of these running species have made it into Australian gardens, as it is these species that has tarnished the reputation and acceptance of bamboo. However with the introduction of more and more sympodial (clumping or non-invasive) species to Australia, people are slowly learning that there is a huge variety of bamboos which are perfectly safe and that will not take over your garden. With bamboo species ranging in height from 3 meters to 30 meters and in a variety of colors and shapes, there is sure to be a bamboo to suit everyone and every application.

Bamboo is the world’s fastest producer of biomass and can be used for anything between production of paper or clothing, used as a building material such as flooring, bench tops, fences and screens, or even as a food source in the form of the edible shoots for your favorite curry or stir fry. In China, bamboo leaf extract has a long history of food and medicinal applications and its potential can only be speculated in a global market. Due to the large variety of bamboo and their remarkable ability to adapt, there is a bamboo suitable for every application.

Bamboo is in fact a type of grass – a very fast growing and giant grass. Bamboo grows in a short but strong growth spurt during summer and then remains near dormant over winter. During the ‘growth spurt’, a bamboo will start with new shoots from the ground which will grow to full height in two to three months. Due to some of the largest bamboo species being capable of reaching over 30 meters in height, during peak growth a bamboo shoot can grow up to 1 meter per day.

Planting a new bamboo is a very rewarding experience since each yearly generation of culms usually double in diameter and nearly double in height from that of the previous year. This continues until the plant reaches its full mature size. For smaller bamboos, this only takes 3 or 4 years while for larger bamboos, it may take 5 to 6 years. Nonetheless, a 30 meter plant in under 6 years is certainly something to boast about. After reaching its full potential, a bamboo will keep generating shoots of the same size year after year with the only possible causes for fluctuations being factors such as water, temperature, humidity, etc.

As a bamboo clump ages, it will slowly grow in size (diameter) as new shoots emerge on the outskirts of the clump. Some bamboos, even though clumping, will grow into large diameter clumps, while other varieties will stay in a very narrow clumps. This is why careful species selection is crucial when planning what bamboos to plant. You obviously wouldn’t want to plant a bamboo which has a tendency to form a clump 2 meters in diameter in your narrow garden bed along your driveway.

Sympodial (Clumping): Sympodial or clumping bamboos are those that DO NOT spread and form tight clumps which only slowly expand in diameter each year.

Monopodial (Running): Monopodial or running bamboos are the dreaded bamboos that will not only take over your garden or property, but quite possibly also your neighbors. Bamboo groves of running bamboo can be very beautiful, but only in areas where space is not an issue or where they can be controlled.

Rhizome: These are the underground stems of a bamboo from which culms, roots and other rhizomes can grow.

Culm: This is the name given to the stems of a bamboo.

Shoot: This is the name given to a young culm as it emerges from the ground from the rhizome.

Node: Nodes are the diaphragms that separate the hollow bamboo culms into compartments. These are the visible ‘rings’ on the bamboo culms.

Internode: The hollow sections between the nodes. These vary in length from species to species.

Culm Sheath: This is the name give to the protective leaves which wrap around new shoots / young culms as they grow. They give the culms strength during the initial growth period until the culm matures and the timber hardens. Once this has happened (usually once the culm has reached its full height) the culm sheaths start falling off. Culm sheaths are also an excellent aid in identifying bamboo species – but that’s too much to go into detail here.

In many developing countries, bamboo is traditionally considered as the poor man’s material. This is obviously due to the abundance of bamboo forests and the relative low level machinery and expertise required to obtain a usable building material in its natural form (ie. round poles). It is used for everything from house framing, flooring, thatch cladding for walls and ceiling, and even as shingles for the roof.

However, in many other countries where bamboo has not traditionally been used in the past, bamboo timber is starting to establish itself as a more exclusive building material into a niche upper-class market. The superior strength and durability of bamboo has earned its successful use as a timber for flooring and bench tops. These applications are utilizing the more processed bamboo timber (ie. laminated strips of bamboo) but bamboo timber even in its natural form (round poles) are in high demand as people are wanting to use it more and more for construction of gazebos, fences, screens, etc.

The strength and hardness of bamboo timber is equivalent to hardwood timber whilst the cost is also comparable to hardwood timber. So why then should people be considering growing bamboo on a commercial level? The simple answer is that it has the potential to be a direct substitute for hardwood timber and thus reducing the pressure on natural hardwood forests.

Bamboo is the strongest woody plant on our planet, with a tensile strength superior to that of mild steel.

Bamboo shoots is an important food source in many Asian countries with Thailand, China and Japan being the biggest consumers. Bamboo shoots are not yet part of traditional Western food, however most people have at some point eaten bamboo (perhaps without knowing it) as it is found in most curries and many other Asian dishes.

Currently, Australia imports vast quantities of bamboo shoots to supply restaurants and markets. Most of this however is in tins, despite fresh shoots being far superior and preferred among consumers. Very little of the bamboo shoots available in Australia is grown in Australia, leaving an obvious gap in the market ready to be filled by the entrepreneurial farmer. As bamboo produces new shoots in summer or autumn here in Australia, corresponding to Winter time in China and Japan, there is also an opportunity for export to these countries during their off-season.

Bamboo shoot production does not need to be on commercial scale, in fact it is also a great small crop for the common gardener – even on small suburban blocks. By choosing species which suit your garden (ie. ornamental or screening varieties) that also produce good shoots (or timber), you can combine a multitude of uses in the one clump of bamboo. A very versatile plant to have at your disposal.

Bamboo is a pioneering plant in that it can be grown in full sun and tolerates high winds. This enables its use as a starting point in restoring cleared land which may have been damaged by overgrazing or poor farming. Because of the bamboos fast growth and dense foliage, it will quickly deposit a thick layer of leaf litter covering the ground, which will then start restoring degraded soils and re-establishing a cooler micro-climate.

A bamboos root system grows into a dense ‘mat’ of fine roots which is shallow but wide spread. This means that its ability to hold soil together is excellent, even in areas where erosion caused by flowing water is a problem. It will hold soil together along fragile river banks, deforested areas, dam walls and spillways. There are no tap roots on bamboo plants, thus they are not going to cause any problems if planted on dam walls (like so many other trees will).

Many clumping bamboo species have very erect (straight) growth whilst still tight clumping and bushy. These species are ideal for use as windbreaks around orchards, sugar cane fields, etc. There are bamboos that will grow very uniformly to whatever height is desired. So whether it be a short hedge (so that crops aren’t shaded) or a tall barrier (to prevent storm damage from high winds), there is a bamboo to suit.

Bamboo has the capacity for very high nitrogen uptake. This makes it ideal for mitigation of waste water pollution and disposal of effluents. Waste water from manufacturing, livestock farming and sewerage treatment plants can be used to irrigate bamboo crops, thus converting the waste water into useful biomass.

It can also be used to treat water run-off from agricultural land. Most farming adds soil nutrients to waterways from pastures and cultivated fields. This water clouds and poisons clean water. Planted alongside rivers, creeks and ditches and holding dams, bamboo can catch these excess nutrients in the run-off water thus preventing harmful run-off from entering nearby streams.

Good heavens, my bamboo is flowering!!

You may not have heard that bamboo flowers, or if you have, then you may have been told that if this happens, then its all over for your bamboo and it’s going die. Though this does hold true for some bamboo species – it is not true for all.

The flowering of a bamboo is usually quite an extraordinary event – not because they produce spectacular flowers (quite dull actually) but for the simple reason that it very rarely happens. A bamboo can have one of 3 flowering patterns dependent of genera and species.

The first (and most impressive) pattern is that called gregarious flowering. Many of the big timber bamboos flower in this way. Each species has an inbuilt genetic time clock keeping track of its life cycle which may vary from anywhere between 20 to 120 years. Once a particular species reaches its life expectancy, it will start to flower which is then followed by the development of seeds. A bamboo flowering in this way spends an enormous amount of energy producing the flowers and seeds which usually stresses the plant to such an extent that it will actually die. This, of course, is all part of the bamboos genius plan. A particular species can flower (and die) all over the world at the same time. This happens because all plants originating from a particular source are clones of the mother plant (since bamboo is usually multiplied via cuttings or clump divisions). What this means is that the bamboo that you have just planted in your garden is not actually a young plant (unless grown from seed), rather it could be a 100 year old bamboo. This is the magical phenomenon that is.

Another type of flowering pattern that some bamboo varieties undergo is sporadic flowering. As the name suggests, there is very little pattern to this type of flowering and it seems that it is brought on my environmental factors (such as drought or cold) rather than genetics. Flowering is usually not wide spread but can happen to either singular plants or all of the same species within a localized area. Sporadic flowering rarely results in the production of viable seeds but on the upside, the plants very rarely die after the event.