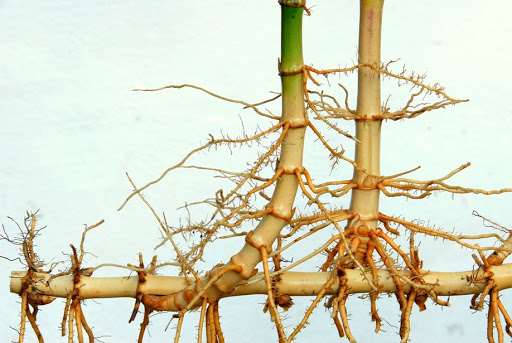 Bamboo is a perrenial evergreen that is part of the grass family (a very tall and woody grass that is). Similar to grass, bamboo is characterized by a jointed stem called a culm. Typcally the culms are hollow but some species of bamboo have solid culms. Each culm segment begins and ends with a solid joint called a node. Nodes are are characterized by a swelling encircling the ends of the culm segments. The segments between the nodes are called internodes. From the nodes grow leaves and branches. Similar to the culms, the branches are also segmented with nodes and internodes.

The underground root system of bamboo is very similar to that of the culm. It can be described as an underground culm growing hortizontally in the soil. This underground culm is called a rhizome. The only difference is that instead of producing branches and leaves, the rhizomes produce roots and shoots at the nodes. Bamboo is a very shallow rooted plant. Bamboo rhizomes typically grow within the first 6″ below the surface of the ground. The rhizomes produce feeder roots that grow further down into the soil. Typically the roots don’t grow anymore than 20″ (50cm) below the surface of the ground. For most bamboos, rhizome development and growth takes place late summer to early fall.

Bamboo rhizomes grow in two unique characteristics. They either grow in a clumping formation or they can grow in a running habit. The rhizome growth patterns classify bamboo either as a clumping bamboo or a running bamboo.

Clumping bamboos have Pachymorph rhizomes that grow upwards developing into a new culm. New rhizomes emerge from buds on an existing rhizome and so forth. This accumulative effect causes the grove to expand slowly around the perimeter. This growth behaviour gives the bamboo a ‘clumping’ habit.

It’s predictable growth behaviour makes it easier to maintain without having to apply containment methods that a running bamboo may need. For most clumping bamboos, they expand only a few inches per year around the main plant. This depends on the species and the maturity of the bamboo. The slow expansion of the clumping bamboo grove will eventually reach a boundary (ie. property line, fence, etc.), at which time root pruning will need to be done.

The clumping habit also gives clumping bamboos a desireable trait for growing in pots or containers. Clumping bamboos tend to last a lot longer in a pot before they get root bound and need re-potting.

Running bamboos have Leptomorph rhizomes that run horizontally under the ground. New buds and roots emerge from the nodes of the rhizomes. Most buds remain dormant but may develop into a new culm or it may develop into another new rhizome. Any new rhizomes will also run horizontally underground and produce more news culms and rhizomes. This growth behavior gives the bamboo a ‘running’ habit. Running bamboos with Leptomorph rhizomes typically require methods to control their spreading habit. See Controlling Bamboo Spread.

New bamboo shoots can grow at staggering rates. Some species of bamboo have been clocked at growing over 3′ (90cm) in one day. That is over 1.5″ (3.8cm) in 1 hour! The entire growth period from new shoot to a full height culm can typically be completed in 30 days.

For most bamboos, the shooting season takes place during the spring season through early summer. As the shoot elongates, it develops into a new culm. New branches and leaves grow from the nodes of the new culm. Leaves from existing older culms drop and grow new leaves during this period as well. Spring is the Autumn season for bamboo as the foliage gets renewed.