Bamboo as a Money-making Industry 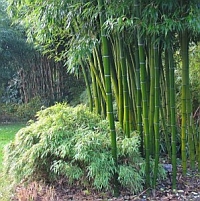 Can bamboo be the next money-earning and environment-friendly industry in Davao City? City Agriculturist Leonardo Avila III was confident that the city has another winning industry in its hands if it is able to maximize the economic potentials of bamboo, the same way China did with its approximately USD20 billion bamboo industry.

The country’s bamboo-based furniture industry has a growth rate of 15 percent per year, with export revenues amounting to USD3.2 million per year. The bamboo-based handicraft industry has a growth rate of 7 percent with export revenues of 8 billion dollars per year. Philippines is the fifth largest bamboo exporter in the world, tailing Vietnam. The three bamboo exporters are China, EU and Indonesia. The Philippine Bamboo Foundation reported that up to 52,000 hectares of land in the country is planted to bamboo but this could not meet the market demand.

As of 2010, the market needs 575,000 handicraft poles and 3.5 million furniture poles. “We are looking at the possibility of establishing sustainable bamboo plantations in Davao not only for its economic value but also for its environmental value,” Avila said. The Davao City Agriculture Office is set to include bamboo production in its Agro Forestry Program. But first, it has to conduct an inventory to determine how many areas in the city are planted with bamboo.

There are more or less 1,500 uses for bamboo. It is a good building material as some species can withstand 52,000 pounds per square inch (psi) before it breaks, compared to walnut wood with only 20,000 psi and steel which is stronger at 60,000 psi.

It can prevent soil erosion and can be made into rafts, for biomass production, textiles, paper, and chemical products.

“The good thing about bamboo is that you can plant it on mountains and include it in multi-cropping,” he said. “It should not replace existing food crops but can complement the existing crops,” he added.

Avila said it is essential that thorough research is done before Davao invests in the bamboo industry just like what China did when the Ministry of Science and Technology conducted a research on the industry way back in 1970. The study looked into the possibility of planting bamboo to improve the quality of the economy and human life. After 40 years, China is reaping the benefits of the bamboo industry.

Bamboo and the economy
Bamboos grow rapidly and reach maturity in three to five years making it a viable alternative to hardwood and traditional timber when it comes to the furniture industry.

The return on investment on bamboo is also a lot faster since it can be frequently harvested, making it an attractive and sustainable community project even for small farmers.

“But we should not immediately go into the export market and compete with China because they have already established their markets,” Avila said. “Davao should instead look into the local market for bamboo,” he added.

He said the wood industry can get a lift even with the present log ban by using bamboo as a raw material for furniture. Bamboo waste can also be converted into charcoal which is in demand in Europe.

Bamboo and the environment
More than its contribution to the economy, bamboo is also an important component in humanity’s fight against climate change.

A hectare of bamboo is capable of isolating or removing up to 12 tons of carbon every year. China’s 5.38 million hectares of land planted to bamboo is helping the country in its commitment to lower its carbon emission by up to 45 percent by the year 2020.

Deforestation is a major concern worldwide and bamboo presents a solution as it can be an ideal tool for preventing soil erosion, landslides and flooding.

The Environmental Bamboo Foundation reported that bamboo produce more oxygen than the other trees “so it can play an important role in combating the greenhouse effect.”

The biomass of bamboo increased by up to 30 percent every year compared to ordinary trees which increases only by up to 5 percent.

Biomass is an energy source that can be directly used or converted into biofuel. Bamboo is a good source of fuel in any form including charcoal..

As of 1995, a total of 1,685 hectares of land in Mindanao are planted with bamboo. The largest bamboo plantations in Mindanao are in Laak, Davao del Norte with 434 hectares and Panabo also in Davao del Norte with 303 hectares. [PNA]
Majority or 40 percent of the country’s bamboo production is used by the furniture and handicraft sector. Housing and construction uses 25 percent, vegetables and fruit uses 10 percent and the rest for other uses.

Several cities in Mindanao have started to develop their bamboo industry. The municipality of Palkan, Polomolok in South Cotabato is into the production of nipa huts made of bamboo for the local and export market.

The sale of bamboo poles in Maitum, Sarangani Province is also brisk prompting the Municipal Environment and Natural Resources Office to regulate bamboo transport in the area. Region XII has reportedly produced 392,523 bamboo poles in 2007.

“There is a big potential for the production of bamboo poles in the Davao Region alone considering that up to 100 hectares of land are planted to banana,” Avila said. Davao Region’s banana plantations are even buying bamboo poles, which they use to support the crops, from Thailand and Indonesia.

The potential for bamboo as a money-making industry for Davao City is huge considering the large hectares of land, mountainous and otherwise, available in the city especially in District 3. However, the success of the industry will still rely on how the local government responds to the challenge.