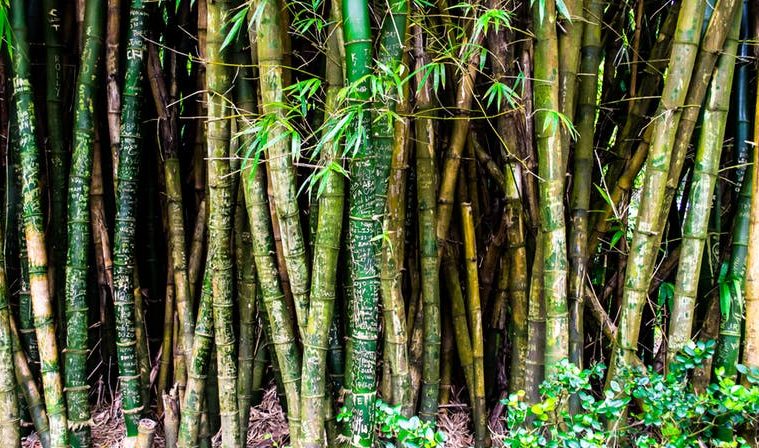 LEARN A THING OR TWO ABOUT THE BENEFITS OF GROWING GIANT BAMBOO AND HOW IT HAS BEEN AN ALTERNATIVE CROP.

Aside from being a source of raw materials for the construction of houses, the production of handicrafts and furniture, and a basis for livelihood programs, bamboo is seen as an alternative crop which has potential soil-trapping capabilities.

In particular, the roots of the giant bamboo (Dendrocalamus asper) can efficiently absorb excess water and bind the soil together, thus reducing erosion.

The giant bamboo is also one of the fastest growing plants in the world, with an average reported growth of 3 to 10 centimeters or cm per day, and can even grow to as much as 100 cm in about 24 hours, depending, of course, on the local soil and climate conditions.

The giant bamboo, which releases more oxygen than trees, can also help stabilize riverbanks, regulate watersheds, protect against soil erosion, and recycle water nutrients. A study conducted by a team of researchers from the Central Mindanao University (CMU) showed that giant bamboo can also cut soil losses and decrease water discharge and sediment yield. These factors, they say, can help minimize soil erosion and landslides.

The project, which was funded by the Philippine Council for Agriculture, Aquatic and Natural Resources Research and Development of the Department of Science and Technology (PCAARRD-DOST), assessed the contribution of giant bamboo, one of the most abundant bamboo species in Northern Mindanao, to environmental services.

During a period of two years, data showed that giant bamboo can cut soil losses by about 75 percent or 22.66 tons per hectare (t/ha) per year, compared with 90.12 t/ ha per year in an open area.

The study revealed that the incidence of displaced soil particles was lessened by 80 percent, while a river near a giant bamboo plantation decreased water discharge by 85 percent. It was also observed that sediment yield, a major cause of siltation and flooding in lowland areas, decreased to 2 t/ha per year in a giant bamboo plantation compared with 50 t/ha per year in an open area.

Bamboo foliage can also help in intercepting raindrops and minimizing their impact on the soil surface. Bamboo litters can also shield the soil from the impact of raindrops as decomposed litter improves soil structure and promotes water entry by 40 percent. This further reduces surface flow, translating to minimized soil erosion and landslides.

Aside from being a fast grower, one- to two-year-old giant bamboo plants are available for the manufacture of handicrafts, which require pliable bamboo splits; thus, livelihood opportunities could start early for the members of a community that grows this plant.

During the initial four years, the giant bamboo can be a complementary crop that could fill a target market, rather than a cash crop. But after this initial stage and beyond, profitable and sustainable yields are attainable without additional expenses for replanting. Eventually, it is expected to become a primary yearly cash crop for the members of the community.