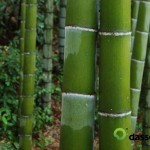 Did you know that Bamboo is grass! It has been around for 30 million years and still going strong.

Some species of bamboo can grow about 3 ft (91 cm) in a single day.

Two Christian monks smuggled silkworms out of China in bamboo canes. Those silkworms were used to give the Byzantine Empire a trade monopoly in Europe, which became the foundation of their economy for the next 650 years.

A certain type of bamboo actually holds the world record as the fastest growing plant ever. This bamboo was able to grow as fast as 35 inches in a single day! This translates into nearly 1.5 inches per hour. You could literally sit there and see the bamboo growing before your eyes. If that is put into speed, it comes out at 0.00002 miles per hour.

Edison and his colleagues discovered that a carbonized bamboo filament in a light bulb could last over 1,200 hours were hence it is the best material, which led to the start of large-scale manufactured light bulbs in the year 1880.

Bamboo actually has a tensile strength greater than steel. Tensile strength reflects how hard it is to pull a material apart. This makes bamboo one of the strongest materials on earth. This also makes bamboo an ideal candidate to replace wood for many of its traditional uses in buildings. The ability of bamboo to bend but not break is what gives it this incredible property.

Bamboo is edible by people and pandas :).  Its shoots have very little fat and calories what is even better it is a perfect source of healthy fiber.

Bamboo makes an excellent substitute for traditional trees. It grows much faster and can be harvested anywhere from one to five years after planting.

All Tesla Model S cars are quality checked on elevated bamboo flooring. The material was chosen “because it looks cool”.

Bamboo is highly antibacterial You will never see infection on bamboo. It has a natural bioagent called bamboo Kun that prevents bacteria and other pathogens from growing on it.