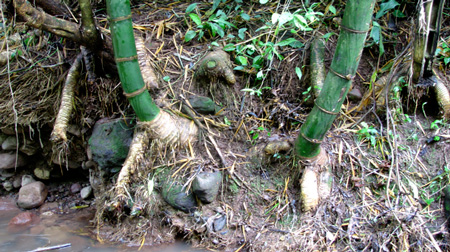 Bamboo forests have many environmental benefits because they function as carbon sinks, produce oxygen, control soil erosion, provide organic matter, regulate water levels in watersheds, conserve biodiversity, beautify the landscape, and essentially contribute to the purification and regulation of the environment.

All woody bamboos have their environmental importance, however giant timber bamboo species such as Guadua angustifolia are particularly astounding…

Bamboo captures huge amounts of carbon dioxide which they generate and convert into oxygen. Scientific studies in commercial bamboo plantations in Mexico show that Guadua angustifolia has the capacity to capture 149.9 tons of CO2 per hectare in the first 7 years after planting (average of 21.41 tons / ha / year). Information which is fundamental and necessary to enter the international system of carbon trading, and which can bring additional benefit for investors and farmers who grow and cultivate Guadua bamboo.

Bamboo does not release the trapped CO2 as it stays captures inside the plant, even after the harvested timber is used in value added products for construction, flooring, panels, etc. it still functions as a carbon sink. One hectare of adult Guadua bamboo can also produce 5.8 times more biomass compared to most other forest species.

Furthermore, bamboo is a sustainable and renewable resource because it continuously spreads vegetatively. This allows the formation of forests much faster compared to most other tree species. Unlike other types of commercial forestry crops where trees must be clear-cut and replanted, in bamboo plantations only mature stems are harvested while younger stems are left untouched to mature and develop.

All these characteristics have called the attention of industrialized countries, and reveals the environmental impact and potential of Guadua Bamboo as a high yielding forestry crop. These countries who according to the Kyoto Protocol must reduce the effects of greenhouse gas emissions, see Guadua bamboo as an alternative that could help solve a global problem, perhaps, even at less costs compared to other expensive technological processes, which are much more complicated as well.

Bamboo regulates he quantity and quality of water, which are essential characteristics when managing watersheds. Bamboo forests also serve for sediment control. They form a sort of wall that prevent the loss of flow in rivers.

In addition, the forest cover of their canopy prevents the evaporation of streams. Therefore the environmental impact of Guadua bamboo is indisputable if it comes to effective watershed protection.

Guadua bamboo plants with their interwoven system of roots and rhizomes contribute to the recovery and conservation of soils present on riverbanks. Beneath the ground lays an extensive network of rhizomes that ties together and prevents soil erosion on hillsides or river banks. Planting bamboo to control soil erosion is recommended in areas susceptible to landslides or slopes in the process of slowly loosing its soil.

This woven root system acts as a cohesive for colloidal particles, making the plant a very important species as a soil protector near rivers. In the rainy season bamboo absorbs large amounts of water, it stores the water both in its rhizomes as in the stems and soil. This means that bamboo has a high water storage capacity. Later on, due to the effects of concentration, the water is returned to the soil, rivers and streams during the dry season.

The leaves of the bamboo plants prevent the impact of raindrops, favoring the dispersion of the raindrops into smaller particles. This contributes that ground water is distributed smoothly throughout the forested area. If bamboo does not exist on hillsides or slopes, heavy rains will probably cause erosion problems sooner or later.

Guadua bamboo also adds a great amount of organic matter to the soil. Its large mass of leaves, twigs and dry stalks contribute to nutrient cycling, thus conserving soil fertility in both its physical and chemical aspects.

As sewage treatment, bamboos are presented as an alternative water pollution solution through the Root Zone Method (RZM). There are different methods to treat water pollution and each is applied depending on the nature and extent of contamination.

The water treatment processes are divided into three groups: primary, secondary and tertiary. The primary methods is purely physical, the secondary is biological and the tertiary can be of both types.

The Root Zone Method for water treatment is of the secondary type because it is based on the biochemical activity of microorganisms that remove dissolved and suspended materials, or by converting them into less polluting compounds. Most of these processes are aerobic and therefore require the presence of atmospheric oxygen which will be used by microbial populations in the oxidation process.

This method of wastewater treatment is based on the action of microorganisms living in the root zone or rhizosphere of different plants. Thus, the wastewater is biochemically oxidized by bacteria present in this area. Plants provide an adequate supply of dissolved oxygen for this process by transferring atmospheric oxygen via the leaves, stems and roots.

Traditionally, the plants used for this purpose are reeds, tules, cattails and sedges. Studies have been initiated with some bamboo species that can withstand moisture for most of the year. The initial problem to overcome with Guadua bamboo would be the adaptation of the small plants to the wet conditions, which are in the early stages of development very susceptible to excess moisture.

Another use which is being investigated is the use of bamboo stem rings, which are nothing more than Guadua bamboo internodes of about 5 cm in length. Especially in rural areas, traditional wastewater treatment materials such as stone and gravel are being used. These could be replaced with the tips of the Guadua bamboo as a material in anaerobic filters. The removal efficiency was similar for both materials, but with the advantage that bamboo is cheaper and such rings are virtually scrap when exploiting bamboo.

Bamboo a host of Fauna and Flora

The temperature combined with a gloom atmosphere that occurs inside a mature forest of bamboo, greatly favors the establishment of different animal species and understory plants that prefer to grow in these conditions.

Guadua bamboo forests and plantations also have a purifying effect, and can be seen on various slopes and undulating reliefs through Central and South America.

Commercial Guadua Bamboo plantations are now admired by environmentalists and nature lovers who see in these forests, a landscape framed by its beauty and generation of diverse environmental advantages.