When and How to Harvest Bamboo? - Bamboo Bootcamp

When and How to Harvest Bamboo? 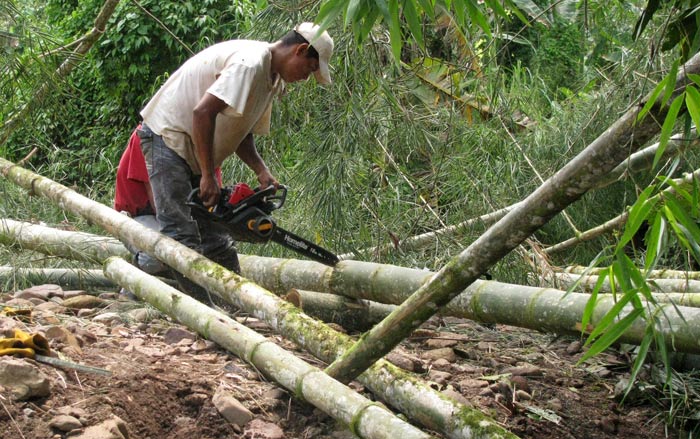 Timing plays a crucial role when harvesting bamboo poles. As a matter of fact, knowing when and how to harvest bamboo has been one of the most important and traditional bamboo preservation methods in areas with smaller resources.

Some say harvesting bamboo according to the right season or moon phase is hocus-pocus, but it is NOT! Studies show that when bamboo is not harvested correctly (and left untreated) it will deteriorate much faster and is more attractive to borers. Therefore, good harvesting practices will enhance the resistance of the bamboo poles and will retain their strength.

To understand why timing is so important, we just have to look at the composition of bamboo. Bamboo possesses large amounts of starch (sugars) which are the principle nutrients for parasites, borers and fungi. When carbohydrates are reduced, the bamboo culm will be more naturally resistant to those biological degrading organisms.

What is the Best Season to Harvest Bamboo?

Sugar content in almost all plants varies with seasons. Dry season is the period of dormancy. During this period, the bamboo plant is acquiring and conserving nutrients for shoot growth in the next rainy season. Thus, starch content is at its highest level at the end of dry season! Therefore, harvesting bamboo at the end of a dry season increases the chances of borer and fungi attacks.During rainy season, starch content is lower (since new shoots are consuming all the nutrients) but moisture content in the bamboo culms is high, which increases the possibility of subsequent splitting and cracking after harvest. This is also the period when new shoots emerge and felling operations could damage or destroy the shoots.

In other words the most recommended time to harvest bamboo is at the end of rainy season – beginning of the dry season.

How to Recognize Mature Guadua Bamboo?

The sugar content in bamboo also varies with age. The starch content is lowest during the first year and highest between year 1-3. Obviously we don’t want to harvest immature bamboo because it didn’t complete the process of lignification, and is therefore less strong and usually collapses on drying. Guadua bamboo is considered mature between 4 and 7 years, after which they slowly start to deteriorate.

Harvesting only mature bamboo stems is also a very important part of proper bamboo plantation management as it will influence the sustainable development of the plantation.

Bamboo gradually changes from the outside, which allows us to recognize 4 very defined stages: shoots, young stems, mature stems and old stems. These mentioned stages can be recognized in the external characteristics of bamboo. Experienced bamboo harvesters can even recognize mature bamboo by the sound in the stem when struck with a stone or the back of a machete.

The age of the Guadua culm should be at least 4 years old but not more than 7 years. Once bamboo is older than 7 years, it starts to dry and gradually loses it mechanical properties, which means it is not capable for any use except for fuel pellets and charcoal.

Young bamboo (0-2 years) can easily be recognized by the color and the presence of culm sheaths, while old or over-mature bamboo contain an excessive amount of fungi and mosses on the bark and have a different color.

When the color of the bamboo stem changes from clear and shiny green to a gray and dark green color, and the traditional white bands at each knot have almost disappeared and are replaced by hardly perceptible gray bands, then the bamboo shows clear evidence of its maturity and can be selected for harvest and extraction out of the forest or plantation.

At the same time the color of the foliage becomes less green and shiny than the younger bamboos. When bamboo stems turn completely white or weathered it is over-aged and too old to be used.

Mature Guadua bamboo is also characterized by the appearance of small circles or specks of white colored fungus (lichens). These lichens partially cover the trunk of the mature bamboo, with diameters of up to 3 cm.

If bamboo is developed in warm and excessively humid climates, then in addition to the lichen, mosses will be present. When Guadua bamboo starts showing these lichens, it is ready to be cut since the bark has the optimal resistance degree and it usually has an age of at least 4 years. These stains become more defined and whiter when the bamboo gets older.

Harvesting Bamboo According to Moon Phase

This is a controversial topic, and many scientists still argue over the truth behind this “peasant knowledge”. However detailed studies in Colombia show remarkable differences with untreated bamboo, when harvested at specific hours and moon phases. The starch content is lowest between waning gibbous and last quarter (between the 6th and 8th day after full moon) due to the higher gravitation of the moon.

On the basis of photosynthesis, in the course of the morning, bamboo starts transporting starch from the roots into the leaves. During the height of the day this process is at its peak making this the least ideal time of day to harvest. Therefore the best time to harvest bamboo, is before sunrise (between 12pm and 6am), when most of the starch is still in the roots.

Cut bamboo just above the first or second node above ground level, with a machete or saw. This way, there is no receptacle in which rainwater can collect. Stagnant rainwater in the culm may cause rot and could weaken the bamboo plant system.

Try to avoid damage or exposure of the rhizome while harvesting. This could cause serious damage and affect the future health of the bamboo clump.

Don’t drag bamboo culms along the ground, this will cause damage to the outer layer which results in stains and blemishes.

Don’t throw bamboo culms on hard ground, such stress can induce cracks along the length of the culm.

It speaks for itself that only healthy culms should be selected, good products cannot be made from diseased and rotten culms. Bamboo poles with splits or cracks, bents, diseases or presenting insect infestation (small holes) are not suitable as a construction material. These bamboo poles should be chipped and used for other applications or industrial processing.

Starch content in bamboo can also be reduced by keeping felled culms upright with the branches and leaves attached for approximately 4 weeks. They can lean against another bamboo “tree” and remain at the plantation, but make sure the felled culm does not have direct contact with the soil. Putting a stone under the felled culm should do the trick.

Parenchyma cells in plants continue to live for some time, even after felling. During this period, the stored food materials are utilized and, thus, the starch content in bamboo is lowered. This method also improves the drying process of the bamboo culm and results in a nice uniform color of the dried culm.